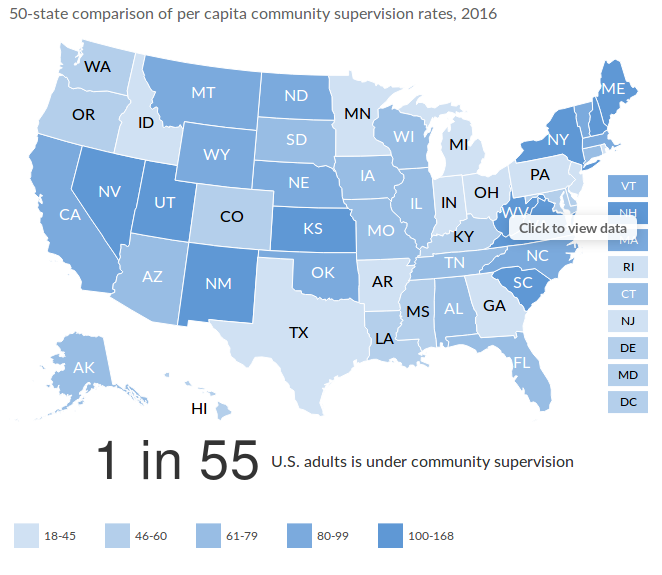 More than a decade ago, policymakers around the country seeking to protect public safety, improve accountability, and save taxpayer dollars initiated a wave of bipartisan reforms that has reduced the number of people behind bars in many states. Because of their high costs and visibility, prisons garnered substantial public attention on criminal justice, while relatively little was paid to the largest part of the correctional system: community supervision.

Probation and parole populations grew 239 percent from 1980 to 2016, and with that came a dramatic rise in the per capita rate of community supervision, which was 1 in 55 U.S. adults—nearly 2 percent—in 2016. Although the community corrections population declined 11 percent since its all-time peak in 2007, it is still twice the size of the population incarcerated in state and federal prisons and local jails, combined. Notably, supervision rates vary considerably by state, from 1 in 18 in Georgia to 1 in 168 in New Hampshire, reflecting the difference in practices and policies across the nation.

This massive scale has too often prevented the community supervision system from effectively delivering on its mission to promote public safety through behavioral change and accountability. Although about half of the roughly 2.3 million people who complete their probation and parole terms each year do so successfully, nearly a third fail for a range of reasons, and almost 350,000 of those individuals return to jail or prison, often for violating the rules rather than committing new crimes.

Scale of Probation and Parole Varies Significantly Across U.S.

To begin to address these systemic problems, policymakers across the nation are adopting reforms, such as shorter supervision terms and earned compliance credits, that prioritize supervision and treatment resources for higher-risk individuals while removing lower-risk people from supervision caseloads. From 2007 to 2016, 37 states experienced simultaneous drops in their community corrections and crime rates. But more progress is possible.

Compared with sentencing and prison reform, which have been the focus of a broad national conversation, the issue of community corrections has received scant attention. It is time for that to change. By taking a similar data-driven approach to improving the community corrections system, leaders in all three branches of government can extend the gains already made to protect public safety, ensure accountability, and control taxpayer costs.